How to Treat Your Pool After A Bushfire

As we begin to see the tail-end of bushfire season in Australia, it seems that for many Australians living in rural or semi-rural areas, that the clean up is only just beginning. So how can you salvage and clean a pool or spa that's taken a direct hit from the fires; or alternately has been in the pathway of ash and debris? Well there are a number of different things you can do. To help, here's some handy advice from our partners at Splash Magazine.

If you were lucky enough to be out of the direct pathway of the fire, you still have the annoying clean up job ahead of you to get rid of ash and debris. In the case of small amounts of ash, use a strong clarifier to filter out particles from the pool using the in-pool filtration system.

Where your pool is murky and dark with a lot of ash and floating debris, you should use a liquid flocculant to drop these particles to the bottom of the pool. From there it should be simple to vaccuum the waste. Use 1 litre of flocculant for every 50,000 litres of water in the pool.

For extreme amounts of debris in the pool, use a heavy-duty flocculant like the granular kind in order to get the most effective results. Then after you've added the flocculant, use the filter.

Once the pool chemicals have been mixed in the pool, turn it off for six hours or until you see all of the debris has sunk to the bottom. Then you should manually vaccuum up the particles, although expect that you may need to do this several times in order to get all of the ash and debris out.

Ash and debris also increase phosphate levels and make the pool a breeding ground for algae. It's critical to keep on top of algae growth during the hotter weather, as otherwise once it's started it can be more difficult to keep under control.

Algae blooms generally place a high demand on the chemicals present in your pool. They also take a lot of time and money to clean up. So rather than be reactionary, it's better to pre-empt the problem. If you reduce these excessive phosphate levels before the weather really starts to warm up, you will enjoy your pool at a fraction of what the cost would have been had the pool been left untreated.

A joey saved from the fires. Image Source

If your property has taken a direct hit from the summer fires, then most likely the water will be significantly murky and have a lot of debris. Also the pool will be around half way empty due to losing water from fire-fighting or evaporation during the fire.

With this amount of severe damage, it's advisable to empty the pool for a thorough cleaning and then later filling it again. Although you should always adhere to local and state water restriction guidelines when doing so. Take precautions with opening the hydrostatic valve, so that you don't create undue hydrostatic pressure on the pool, which will damage it.

After emptying the pool, you should clean the shell, refill and balance the pool accordingly. Although add a strong oxidiser initially with a clarifying quality. After this follow up with an algaecide for added protection.

Although the bushfires have come and gone and wrecked havoc on the landscape, life still soldiers on. The good news is, so can your pool with the right care, attention and TLC.

For more information on pool heat pumps and pool add-ons to make your life easier, speak with Evoheat today! 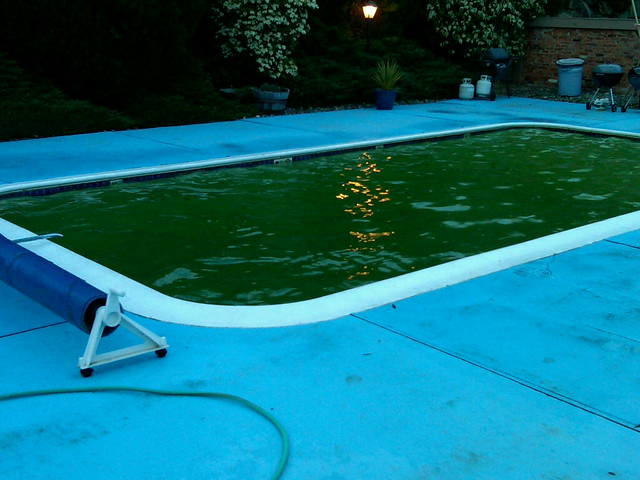